With the World Cup, ESPN and a pair of familiar faces return — briefly — to hockey 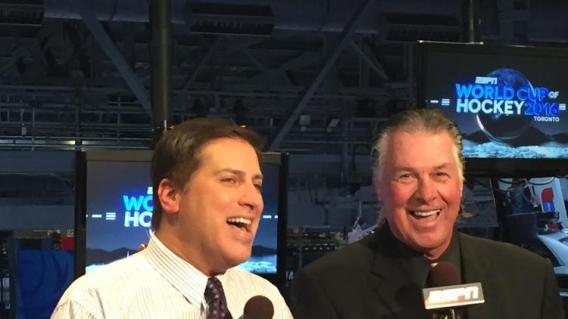 Taylor Swift song blasted through the Air Canada Centre last Saturday as the World Cup of Hockey players before the match meandered figure-eights on the ice, peppering goalies shots. On one side were the famous American skaters in red, white and blue; On the other hand, blue-black-and-white Team Europe, invented the smaller puck Kingdom, as in Slovenia and Norway.

ESPN announcer Steve Levy watched these warmups for the first game of the two-week tournament from the booth high above the arena.

. “I’m so excited, I strip I could jump directly from this place,” said one in particular, as a commentator and former Kings coach Barry Melrose – red face, yellow pocket square – looking pensively beside him.

Levy and Melrose were once hockey fixtures, back when ESPN controlled the television rights to the NHL in the US

Melrose, mischievous and fashion conscious, was a prominent color commentator, emphasis on color (on a burst of offense: “It’s like the county fair and shooting ducks on the biggest teddy bear”). Levy, stable and booming voice, was the play-by-play man, known for calling some of the longest games in NHL history.

But whether ESPN right to go during the lockout 2004-05, and NBC now owns over 2021’s Disney-owned network of abandoned live games – and some critics, a lot of coverage altogether. Neither Levy nor Melrose called hockey game for more than ten years.

“I think the last call I made was to the Conference Finals between Toronto and Carolina in 2004,” said Levy, who was standing near Melrose outside the broadcast booth for about half an hour before the match.

“But what we were the last one we had?” Melrose said.

That day game, the first of many that would call during the eight-team tournament was a reunion – in more remote scenario – a harbinger of the future of sports TV.

ESPN, motivated by concerns of many personalities in-house – and maybe a restlessness that completely out of the main North American sports – stepped in.

He said that it was at least conceivable, it could be the beginning of the return to more hockey partnerships. “This is a great platform for us to look at the business opportunities of all kinds,” NHL Magnus said, “If the law were available in the country it will only help you do more with them.”

But mostly, he said, it was simply an interlude and a promising way to round off its coverage of other sports. “The idea came up to get back to the store NHL and it just seemed a perfect opportunity,” said Magnus. “And we knew we had Steve and Barry.”

The gold standard for hockey announcers Mike “Doc” Emrick. Has an agile mind, Encyclopedic Dictionary, deep historical knowledge and Quicksilver language – like Vin Scully on speed. To ESPN, has a flaw: It is with NBC.

Levy and Melrose try another approach. It’s not always easy or necessary to keep up with every one timer, lightning-quick passing and Dipsy-Doodle. So opt for a more relaxed atmosphere, the atmosphere of the two friends watched the game, which happens to be on TV.

“We are fully aware, as we say the game is not your standard coverage, stick-to-stick every game,” said Levy. “We want people to feel excited. We want people to laugh at home during the broadcast.”

Melrose, which is often willing to be in good spirits under the barbs of his partner, he added: “I hope happens is that people see like each other and have a passion for the game, unlike us being X and O nerdy guys.”

(Magnus called Duo “as the two boys who are sitting on the balcony during” the “Muppets.”)

Levy, 51, is a frequent SportsCenter anchor also known for broadcasting college football and some Major League Baseball. Melrose, 60, and former professional defender, is a trainer who became a broadcaster-turned-coach-turned-broadcaster. Kings fans will remember him for that, behind the bench on its unlikely run to the 1993 Stanley Cup finals – and his shooting during the season 1994-1995.

“L. A. You have to remember, please,” said Levy on Melrose.

“I was the favorite,” said Melrose.

“Such a favorite you ran out of town,” said Levy.

Levy stepped into the booth to go through some technical details with the manufacturer. Melrose continued to talk about the tournament. World Cup – the first in 12 years and the first serious go for a separate competition in two decades – is revived and uncertain experiment, an attempt to conjure up some NHL excitement of the Olympics without having to stop in mid-season to do so.

“I just think it’s excitement everywhere,” Melrose said in his slightly sing-song-y Canadian accent. “In Group A, Canada has the most talent. Group B, anyone can beat anyone – Russia, Sweden, Finland, even Team Europe,” he said, breaking down field.

He weighed in on Team North America, other ad hoc club, Canadians and Americans under 24, the rate became the X-factor in the tournament. “It’s exciting. I mean,” he added, “it’s hard to know who will cheer them who they represent. They fight for the youth, I think.” He paused. “Like all of us.”

Whether the World Cup may prove popular with fans or valuable investment for ESPN remains to be seen. In Toronto games are huge; States are something else. On Tuesday, the US team lost to Canada, ensuring first round of elimination and evaluation of the potential to challenge for ESPN.

“I think we can hope that people will move to North America,” Magnus said dryly before the US-Canada game. “I think the team is 50% American.”

Outside the booth before Saturday’s match, concrete results did not seem to matter.

“I think Americans will be interested no matter what,” said Melrose.

“There are lots of great story lines,” said Levy.

Levy gave him sidelong glance. “Mary and Herb from Tuscaloosa, that’s what you have invented?”